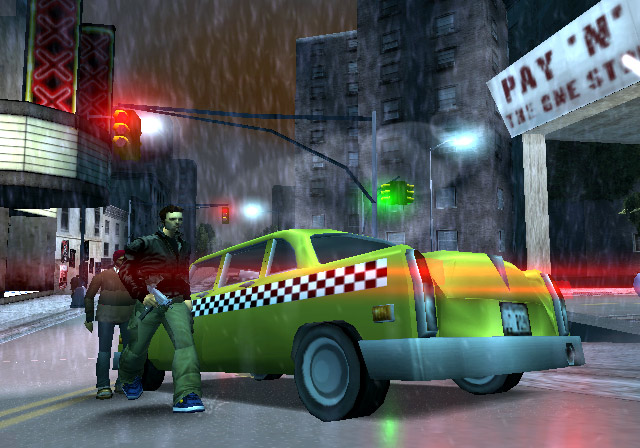 Why The GTA Definitive Trilogy is Selling
(Despite Her Flaws)

It’s no secret that Grove Street Games released the GTA trilogy definitive edition as a train wreck of bugs and performance issues. Grammatical errors litter buildings in ways you could only expect to see from automated AI upscaling. Character faces are cartoony. Seriously, they look like they belong in RuneScape or Miitopia, and it’s wildly out of place in our classic mobster simulation franchise.

Here’s a tweet from Thomas Willamson that fed the fire:

“As art ages, what was at the time a mistake becomes an homage, it becomes history. It’s preservation is important. Han shoots first. One small step for man. Some mistakes should be rectified, and some should be preserved. Being on the deciding end is a heavy responsibility.”

Okay, so I’m starting to see how those grammatical errors made it through quality control. Anyway, internet memes and outrage stepped into the frontlines.

Removing shattered glass effects with disappearing windshields? That was clearly the artists’ original intent, but the hardware limited Rockstar. Character model has 12 sets of biceps? Grove Street Games served the community by preserving a piece of artwork comparable to the Mona Lisa.

Of course not. GSG and Rockstar rushed these ports to hit Holiday sales figures.

But the GTA trilogy still sold like hotcakes on the Switch.

I won’t be joining the screeching cacophony of internet voices rambling about how consumers need to rise and revolt. I’m more empathetic than that. I’m not going to preach words over your spending habits. You hear enough of that from your family.

Instead, I want to write something casual. Let’s talk about why the GTA Trilogy Definitive Edition is still selling.

Let’s talk about impact. At surface level, it might feel like the Nintendo posse missed out on the Cyberpunk 2077 scandal. They get to walk away from the GTA trilogy fiasco with sparkly participation ribbons. But the river runs deeper than that.

The Most Controversial Franchise in Gaming History

On November 11th, 2021, Nintendo permitted the most controversial trilogy in gaming history to come to the Switch. Ports of Mortal Kombat and Night Trap have already hit the virtual shelves of the Nintendo eShop, dampening our shock. Hell, even Saints Row has already ported over.

But who are we kidding? When it comes to moral controversy, nothing is more iconic than Grand Theft Auto.

Sure, Grove Street Games delivered a crummy port. I get that. This release still feels like the perfect time to reminisce about how differently the world views gaming, in general.

I remember the first time I laid eyes on the legacy known as Grand Theft Auto. While the particular installment might be different for everyone, I’d wager a vivid visual memory exists in every gamer.

I was seated on an old couch in a dimly lit room. The adults crowded around the television. The host fired up his Playstation 2, ready to unveil his favorite new party trick.

He loaded up his Grand Theft Auto III save file. We met Claude – a man in a black leather coat and baggy green cargo pants, standing directly outside a police station. You know the one. It’s not quite in Triad-infested Chinatown, not quite in Double-Clef-Radio-bopping little Italy.

Claude stood motionless for a moment. Everyone in the room began making remarks about how real the game looked.

Pedestrians strutted along the sidewalks uttering absurd lines to one another. Traffic was muddled. Drivers honked their horns with utmost frustration and hollered profanities through cracked windows.

Then ol’ Claude whipped out a flamethrower. The mood of the crowd grew apprehensive.

In one fell swoop, our host ignited a nearby Bobcat. (I’ll jog your memory. It was that small Toyota Tacoma pickup truck clone.) Now, we weren’t living in the dark ages. We had seen weapons in video games before… It was the events that followed that elicited surprise.

The pixilated citizens of Liberty City broke into widespread panic. Women were screaming. Police officers raided the scene, gripping pistols with palpable fear glistening in their eyes, getting mauled one after another. Liberty City reacted and interacted with the ‘protagonist’ in tangible ways, not unlike what you expect to witness while rampaging the streets of New York City.

There's No Such Thing as Bad Press

Even though Take-Two Interactive fell into a craze of purchasing development teams left and right, they knew they bought something extraordinary when they landed a franchise already notorious for taking bans across the global marketplace. Instead of purifying that studio, they fed it and groomed it like a prized show dog.

Their first mission? To create a game that ripped off the plotline to The Godfather. After taking home a tidy reward of $250 million, they quickly followed up with a sequel that twisted the story of Scarface. Although it wasn’t the campaign that caught everyone’s attention, it was the rampant prostitutes roaming the streets. It was the hard-working policemen being lined up like sacrificial lambs. It was the game’s namesake – being able to effortlessly commandeer an innocent bystander’s vehicle to carry out a life of crime.

Take-Two Interactive turned a mediocre franchise into a cultural phenomenon overnight. They birthed Rockstar, an entity that prided itself on edginess and violent satire. Take-Two birthed the company that escorted Hollywood straight into the gaming universe.

News anchors droned on about it. Our teachers rambled about it. Our parents felt obligated to take an immediate stance about the burning question of the decade:

Spoiler alert: Most of us didn’t grow up to wear human faces as masks or drink the punch at a Manson party. If anything, GTA gave us all unrealistic expectations of health care prices.

We weren’t developing murder addictions. We were busy stashing our garages with rare bulletproof cars and scouring the perimeter of every Rockstar billboard for hidden packages. We were vibing at traffic lights waiting for them to change, while we listened to Lazlo for the 1000th time on the radio.

Although, the answer to that question wasn’t so clear-cut in 2001. Especially since GTA 3 launched only a month after the World Trade Center buildings collapsed on September 11th.

People deserved the right to raise their concerns. After every school shooting, some dirtbag defending attorney prattled nonsense about how violent video games trained his client to become a murderer. It was the Columbine shooting fiasco all over again, but everyone had long forgotten about Doom and Quake.

Grand Theft Auto took the spotlight as the psychopath’s scapegoat. Jack Thompson comes to mind. The man made a fool of himself on an episode of 60 minutes.

In truth, GTA 3 cut terrorist-related content before release in an – admittedly half-hearted – attempt to be more in tune with the times. Rockstar removed missions such as hijacking buses or committing mass racial shootings and replaced them with optional rampage missions. Rockstar also changed the box cover art for GTA 3 at the drop of a dime – because the explosions on the original artwork felt tasteless.

Let me put this into perspective: GTA 3 was, in many ways, my generation’s Woodstock. It was my generation’s Polio outbreak or World War. As they say: You had to have been there.

Just take a look at the design differences between Jak and Daxter and Jak II. The sequel was a completely different game. Jak had an attitude, stole vehicles from innocent civilians, and could shoot pedestrians. Even titles like The Simpson’s Hit and Run wore the coveted outfit of a violent open-world title set in modern times.

The gaming industry worked hard to push this idea out of everyone’s heads: videogames were more than simple children’s toys. They were a blossoming median of entertainment. The gaming industry wanted to prove its technological advances to a broader demographic.

The PS2 had more substance than collecting dust in everyone’s living room or playing DVDs on repeat.

Honestly, I’m not sure how anyone expected violence to stay out of games. Fantasies of carnage are deep-seated into human nature. Old children’s stories fill themselves with slaughter. When we discovered the atom, we immediately weaponized it. When we forged steel, we weaponized it.

The moment we could add a hint of realism to video games, we weaponized those, too. It was inevitable. Rockstar was just the first company bold enough to take the leap.

Nintendo took a strong stance against GTA. Nintendo had a couple of decades of reputation for producing family-oriented, blissful fun under their belt. Yamauchi was a wise old businessman who understood the importance of branding.

Part of that branding was: No blood, no dying, no filling up children’s heads with unclean thoughts.

Of course, a few decades have passed, and we’ve conducted thorough research. Psychologists have assured us that children are capable of discerning fantasy from reality. Big surprise, right?

We also discovered that gaming is such a normalized activity for adolescents that neglecting to play is a more prominent sign of social isolation.

In retrospect, the entire GTA controversy feels like a faded sepia tone memory from another world.

Finally, we can say that Nintendo has opened their minds and their wallets to a franchise that’s pocketed over $6.4 billion. Reporters could make an argument that Nintendo sold their souls to the devil, and there’s no turning back.

No judgment here. Everyone else already crossed that bridge 20 years ago. Breaking boundaries prints money, especially the moral-panicky kind of boundaries. Honestly, I’m not sure another game can produce moral controversy in the same way that GTA did.

For better or worse, I doubt Nintendo retreats to its grassroot principles. It cost them a fortune in sales on their older consoles. Instead, Nintendo seems ready to shed its reputation as childish console creators.

It’s ironic. Nowadays, we’re all feeling pretty jaded by mature themes in video games. We intentionally ran back to wholesome and pure. If it weren’t true, Switch sales would not be 93+ million and counting.

Of course, Nintendo will continue publishing wholesome games anyway. It’s what they do best.

The truth is, nothing really changed – except for the fact that we can play bad ports of two-decade-old games. The rest of the story is a rich narrative we create for ourselves; to me, that narrative is a testament to how far we’ve come as a demographic of gamers. It’s a story of what we’ve learned and the hiccups we’ve had along the way. Nintendo penciled in the final chapter. Now we can close that book and carry on to the next.

It seems like the new chapter is all about releasing polished games without premeditated patchwork. I can’t say I’m surprised that Rockstar took the spotlight on this new battle, too.

Return to Behind The Scenes
Return to Home Page