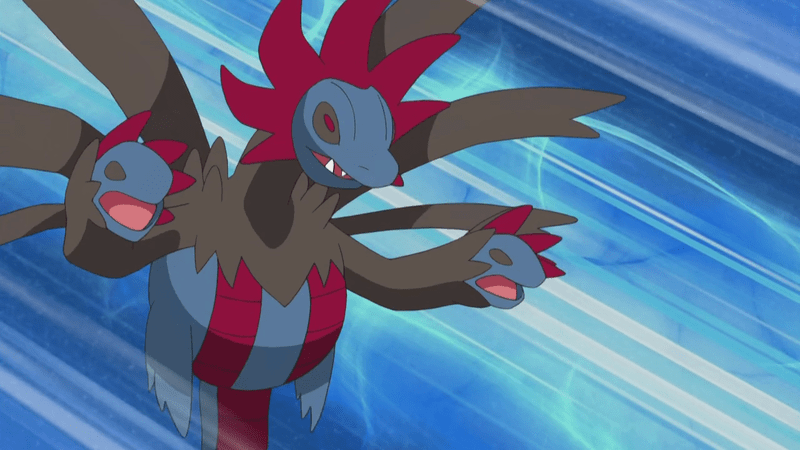 The Epic Origin Story of Hydreigon

Thanks to an interview with Ken Sugimori, we know a lot about the creative process and inspiration behind our boy Hydreigon.

In the earliest stages of development, Dieno and his evolutionary line were intended to be a family of dragons based on militarized tanks. To translate Sugimori’s words, “The design team wasn’t happy with the outcome and put the project on ice.”

Later, an order came through the door for another pseudo-legendary dragon to appear in generation 5.

The artists at Game Freak revived Dieno’s evolutionary line and made some revisions. This time Hydreigon drew inspiration from an old Japanese legend born of the Shinto religion: An eight-headed serpent beast known as Yamata-no-Orochi.

Now, there are plenty of hydras and multi-headed dragon stories told across the world. Luckily, we have confirmation from Ken Sugimori himself that Orochi was responsible for Hydreigon’s design inspiration.

Hydreigon had 8 heads and 8 tails at one point in development. The artists weren’t satisfied with such a busy design. Instead, they created something simpler that appeared to be 8-headed when viewed as a silhouette.

Then, boom! Hydreigon as we know him today was born from the hands of Game Freak. According to Sugimori, the purple tread marks on Hydreigons belly are leftover remnants from his design as a Tank Pokemon.

These discoveries can be credited to Dr. Lava, who has an entire YouTube series dedicated to lost Pokemon designs. Still, I’d like to take his research a step further by telling you who exactly this Yamata-no-Orochi fellow is and why he’s so prominent in Japanese folklore.

Yamata no Orochi and His Frightening Appearances:

Traditionally, our fearsome Orochi was described to have the following physical traits:

Hydreigon isn’t the only pop culture reference to Orochi. He’s quite popular! Here are a few other appearances he makes:

There are a ton of obscure references I haven’t mentioned here. It’s no fun if I spoil them all for you!

The Traditional Legend of Orochi:

Orochi is not the main character in this story. Be patient, my padawans. I’ll keep it short.

The story begins with a Kami named Susano-o no Mikoto. Kami are the spirits and Gods of the Shinto religion.

Susano-o and his two siblings were born in an unorthodox way. Their father, Izanagi, washed his face to cleanse it after returning from a trip to the underworld. Two children were born from the tears of his left and right eye, and Susano-o was born from the snot of his nose.

The birth of Susano-o is odd, but fitting. Susano-o 100% was a little snot… or rather, a big, terrifying, and immaculately manly snot. His hair was an unkempt lion’s mane – boasting more frizz than any man or woman could bear. Susano-o was definitely not the god of hair products. He also cried a lot.

Susano-o’s siblings were put in command of the sun and the night. Susano-o got the short end of the stick. He was put in charge of storms and the seas. Nose children must be the red-headed stepchildren of Shinto. That’s my theory.

Just as you would expect from a storm god, he was a destructive kind of guy. He was a mischievous prankster. He always put off his duties, whatever the heck storm god duties were.

Instead, he complained that his job sucked. He flooded rice fields in childish fits of anger. He leveled entire mountains. He whined to all the other Kami that his sister, Amaterasu, had the cooler job. She was the goddess of the sunlight, after all!

Finally, Susano-o’s dad put his heavenly foot down. He threatened to banish Susano-o to the mortal realm. Susano-o screamed, “Fine. I wanted to go visit mom in the underworld anyway!”

He requested to visit his sister, Amaterasu, one last time before permanent exile. His father agreed to these terms.

Staying true to form, Susano-o rampaged for his entire trek to Amaterasu’s house. When he arrived, Amaterasu was convinced her bi-polar brother intended to stir up a storm. The wake of his path exposed a signature storm god devastation. If that weren’t enough, she knew his horrendous reputation.

Susano-o insisted he was just following Japanese custom to bid farewell to his sister. Amaterasu wasn’t buying it. Can you blame her?

So, to prove his point, he challenged Amaterasu to a contest.

The stories vary during the contest, but both versions claim Susano-o the unanimous victor. Both stories state that Amaterasu broke Susano-o’s sword into three pieces, swallowed it, and spit out three female Kami. Both stories claim that Susano-o ate Amaterasu’s necklace and spit out five male Kami. That’s the important part.

Pretty wild stuff, right? It gets crazier. Susano-o’s dad completely backed out on banishing him. I don’t know about you, but I don’t usually throw around threats of abandonment willy-nilly. Maybe Izanagi had a Godly case of Alzheimer’s.

Anyway, Susano-o rubbed his victory in with some celebratory rampaging. He flooded rice fields and committed mass murder of puny little Earthling insects. Some accounts claim that he dropped a fat victory turd in Amaterasu’s living room.

“Boys will be boys,” Amaterasu said.

Then, finally, Susano-o crossed a line:

Susano-o killed and disemboweled a heavenly horse and tossed the carcass into Amaterasu’s knitting room.

Amaterasu was furious. She hid in a cave and the sunlight of the Earth disappeared. Life without sunshine is practically life without Wi-Fi. No bueno. The world fell into chaos. A group of Kami began scheming a way to get Amaterasu back.

Eventually, she was lured out of her cave by a mirror and a promise of a ‘more beautiful Kami’ than her. She was too proud to admit she was tricked. Instead, she said something along the lines of, “Fine. I’ll do the stupid sunlight thing again. But get my rotten brother out of here, for Kami’s sake!”

Susano-o was forced to make 1,000 offerings to the Kami. They also ripped out his fingernails, shaved his beard, and gave him a swift kick straight to the Earth realm he’d been flooding and shredding to pieces.

Okay. Here’s where our boy Yamata no Orochi pokes his 8 heads into the story:

Our beardless Susano was wandering the Izumo countryside hungry and lonely. He noticed a pair of chopsticks floating down a river, and decided there were probably people living upstream.

There were people upstream. Depressed people bawling their eyes out. He saw an elderly couple and their pretty daughter. Susano-o walked up to the troubled group and asked them if he could help.

One of them said something along the lines of, “This cranky ol’ dragon named Orochi eats one of our daughters every year. We had eight in total. Today, he’ll be eating our last daughter!”

Susano-o said, “Yooooo! I’ll save your daughter if I can marry her after.”

What a true knight in shining armor. A conditional agreement to saving a damsel in distress. I bet if he’d arrived six years sooner, he’d try to marry all seven daughters.

Susano-o ordered eight barrels of highly potent sake to be left outside of the home, and he requested the daughter stand behind a window so her reflection could be cast into a barrel of alcohol.

Susano-o hid behind some bushes on a nearby hill. 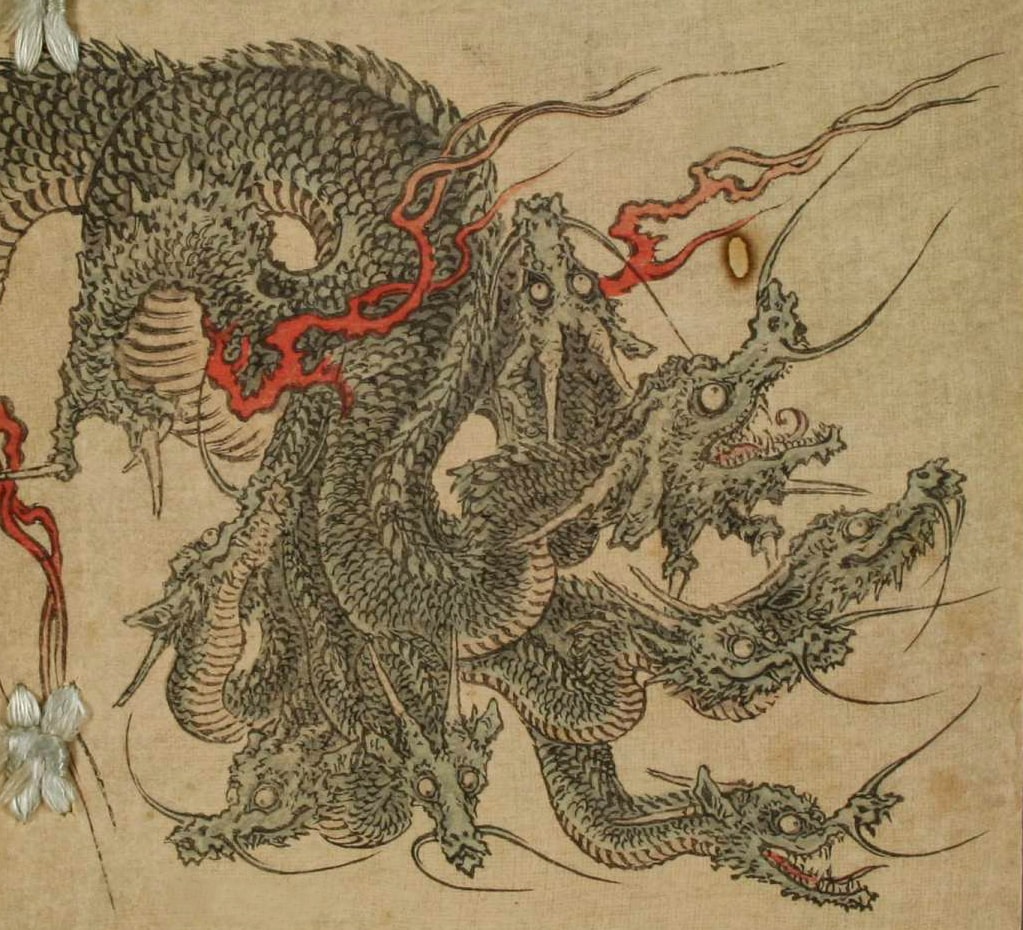 Sure enough, Yamata no Orochi came violently waltzing through the town to claim his sacrifice. Orochi dipped one head into the barrel with the woman’s reflection and decided he liked the idea of getting drunk. He dipped one head in each barrel and chugged those barrels with the tenacity of a college frat boy.

Orochi began to thrash about and fell into a drunken slumber.

Once the serpent could no longer defend himself, Susano-o cut each of Orochi’s heads with his sword. Then Susano-o proceeded to slice off Orochi’s tails.

Inside one of the tails was a legendary sword. It was called the Kusanagi. Susano-o married his manic pixie dream girl, gifted the Kusanagi to his sister Amaterasu as an apology for his hissy fits, and lived happily ever after.

Amaterasu re-gifted the Kusanagi to her son, Ninigi, while crowning him the first Emperor of Japan. The Kusanagi is one of three Shinto items passed down to Japanese emperors – even today.

And that’s the Shinto legend of Orochi, and why he’s still very relevant in Japanese culture. More importantly, that’s our origin story for Hydreigon, the pseudo-legendary dragon from Pokemon Black and White.

Just promise me you won’t chop the little guy into pieces to try and find some legendary sword. We call that virtual animal abuse. It’s frowned upon.

Is There A Moral To The Story of Susano-o and Orochi?

The Izumo province waged an ancient war against the Koshi province. Many people believe the story of Susano-o and Orochi is a metaphor for the war. Texts from the era state “The eight mouths of the Koshi province were suppressed.” That explains the obsession with the number 8.

At surface level, there is a resounding message that Susano-o grew from the blossoming experience of hardship. That’s a message that always withstands the test of time.

Although, there is a deeper, more powerful message that comes with slaying Orochi.

Scholars believe that Orochi was hailed as a dragon God of the Hiikawa river. The Hiikawa river was tainted with the aftermath of ironwork. It destroyed crops and often flooded the land. When our crybaby hero Susano-o descended to Earth to slay the beast, it stood as a symbol: The Japanese people had moved forward from ancient rituals of sacrificing virgins to the Gods.

Good for you, Susano-o. You may have used an underhanded technique for slaying your dragon, but you slew an outdated martyr belief. That makes you a hero in my book.

Is There Any Evidence That This Story Originated Someplace Other Than Japan?

This legend is old as dirt. It appears in the Kojiki, during the Wado period. We’re talking around the year 712.

Still, the Chinese developed the Silk Road to trade with the West as early as 130 B.C. Greece and China were trading even earlier than that. Hesiod’s Theogony dates back about 600 years before that and spoke of a nine-headed hydra with an immortal head. The Greeks had plenty of time to marinate the story and pass it along to visitors.

Seems promising. Of course, all we can do is speculate.

Next time you send out Hydreigon against your snot-nosed kid brother, remember that you are carrying on the legacy of the almighty Orochi.

Blast those Draco Meteors with pride. Enjoy that intimidating movepool of pristine type coverage. Maybe you can garnish your perfect sweep with a story about how Hydreigon was almost a tank Pokemon.

But it’s okay that he’s not. I like him better this way.