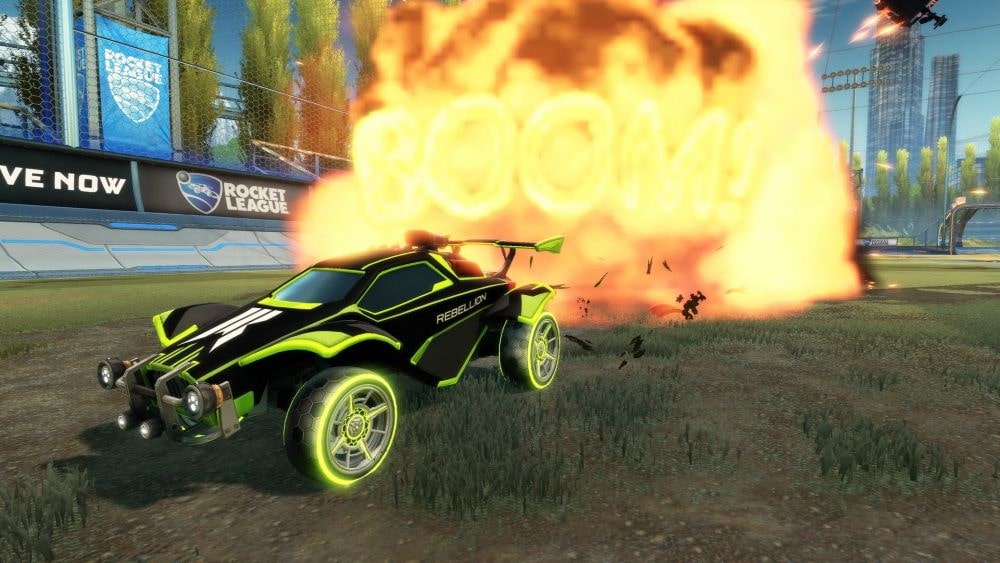 Tapping into The Minds of Our Bad Rocket League Teammates

Mentality is the greatest obstacle to overcome on the beaten path to mastery in Rocket League, friendship, performance arts, and just about everything else in life.

Since the release of Rocket League in 2015, no game has captivated the feeling of a genuine sports game to the same degree. You aren’t running a simulation featuring a handful of guys scattered across a field. You’re part of an honest team. You play the unprecedented role of a solitary player.

The skill ceiling is so incredibly high it’s inspiring.

But something is holding you back: Your teammates.

RL has one of the most toxic player bases I’ve ever witnessed. Honestly, it makes sense. We’re combining a game where players heavily depend on one another with a competitive setting that mimics an actual sport.

I’m not going to tell you that bad teammates are some imaginary unicorn living exclusively in your head. Bad teammates are real. Although, instead of bashing our heads into a wall or throwing a brand new controller, it’s more efficient tapping into our teammates’ thought patterns. 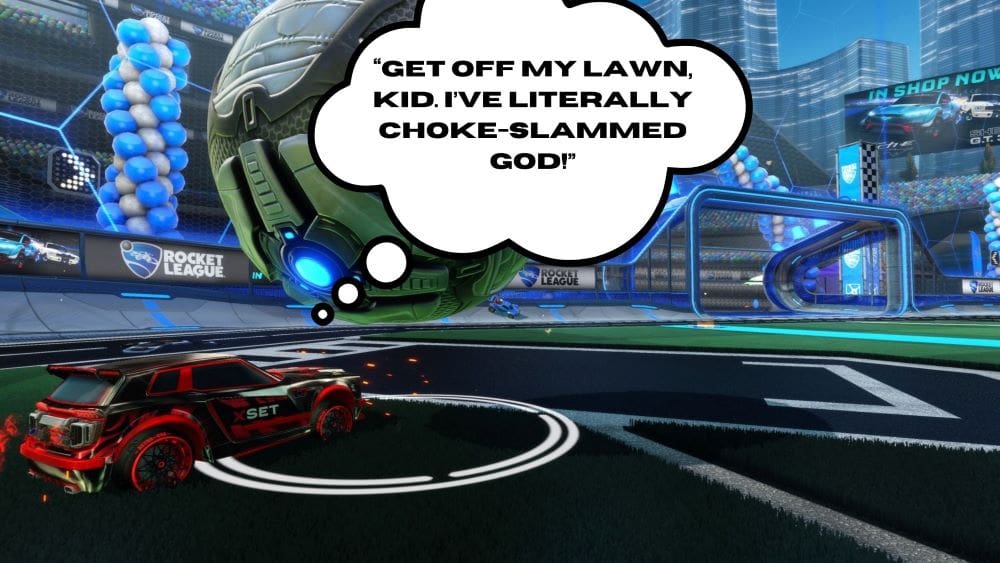 Toxic teammates aren’t as common as the next category, but my gut says they’re the reason you crash-landed onto a page like this.

They’re undoubtedly the most memorable and obnoxious teammates. They think they’re just so dang cool because they watched a video tutorial titled How to Wavedash.

Here comes a hard truth: Toxic teammates are here to stay. Hiding behind the veil of internet anonymity makes it easy for a person to throw sportsmanship out the window and escort toxicity into the limelight.

I do have advice, though:

Rocket League is an immersive game, but try to break immersion when dealing with teammates who exhibit an ugly attitude. Remind yourself that they have a life outside of the game. They aren’t just some pixelated car body with a set of Sovereign A/T’s equipped.

Your teammate is human. Maybe their dad wakes them up for school every morning by punching them in the face. Perhaps their trusty doctor diagnosed them with tendonitis and drove off to Mexico with their girlfriend. Maybe their house is made of Legos. That’s the thing. You’ll never know.

Most likely, they just hopped out of a game where someone was toxic to them, and they’re simply keeping the Olympic torch burning.

Flip chat off and hand the controller to your cat, then laugh as they miserably attempt to take on the opposing team alone.

You’ll get your rank back. You always do.

In the meantime, keep a vigilant eye on the mistakes they’re making. But don’t spam annoying quick chats about it. Don’t feed them your valuable attention. Instead, acknowledge that you likely make similar mistakes. Spend some time thinking of viable solutions for every error you witness. Apply that knowledge to your own gameplay.

The Teammate Who Acts on Impulse 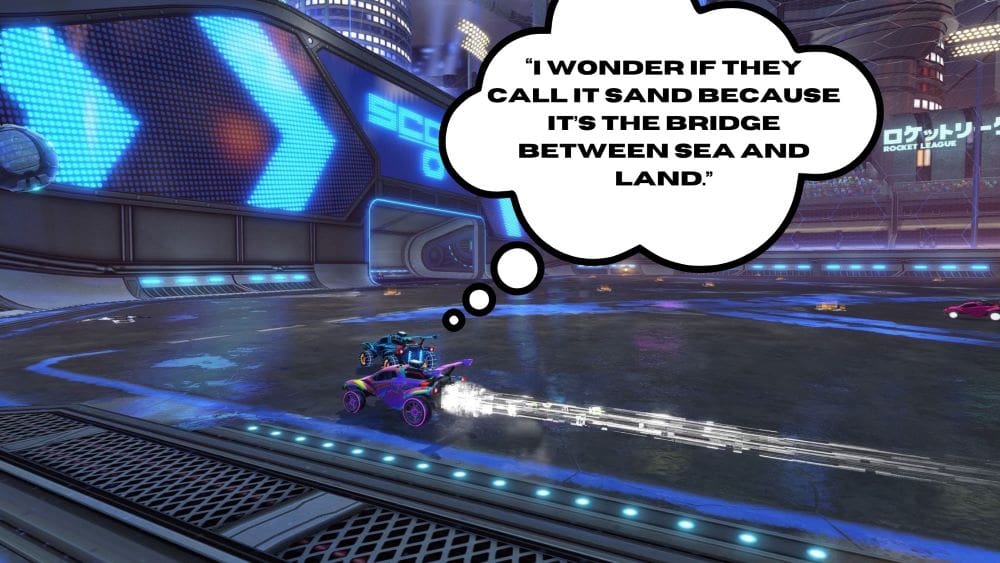 Here’s the big one:

Many teammates in Rocket League aren’t thinking at all, and that isn’t necessarily a bad thing. Instincts reign supreme in a stadium.

The truth is that it’s better to make an awful decision fast than it is to hesitate on a good decision. Rocket League is a lightning-paced sport, and there’s a good chance your teammate is fully aware of the on-field sin he’s just committed but wants to push through the mistake and attempt to remedy it.

Don’t sweat the small stuff. Your teammate has good intentions. He’ll help more than he hurts, no matter how large the rank disparity may appear.

Remind yourself that you and your opponents are still making common mistakes, too. If it weren’t for human error, all games would end with 0 goals scored.

Continue playing however you feel most comfortable with these teammates. If you start noticing a trend that leans into a category below, you’ll want to adapt accordingly.

The Teammate Who Doesn’t Realize His Mistakes

Yeah, you’ll get a handful of outright oblivious teammates.

Much like a toxic player, these teammates have convinced themselves that they’re better than you. They think they can break the rules of rotation. They firmly believe that they’re in the wrong rank. They likely have friends in higher ranks and want to reach that level.

Sometimes their toxic internal monologue is true. Most of the time, it’s not.

They’re ranked below their friends because they continue to make bad choices. There is one thing you can count on: they’re pushing through each game with brute force mechanics. If you want to win a match with these teammates, your best bet is to flip off chat and play more defensive.

Don’t chase points. It isn’t a contest. Play smart. Play patiently. After a 5 minute game, you’ll likely never have to see this player again. You aren’t obligated to prove anything to him.

The Teammate Who Hesitates 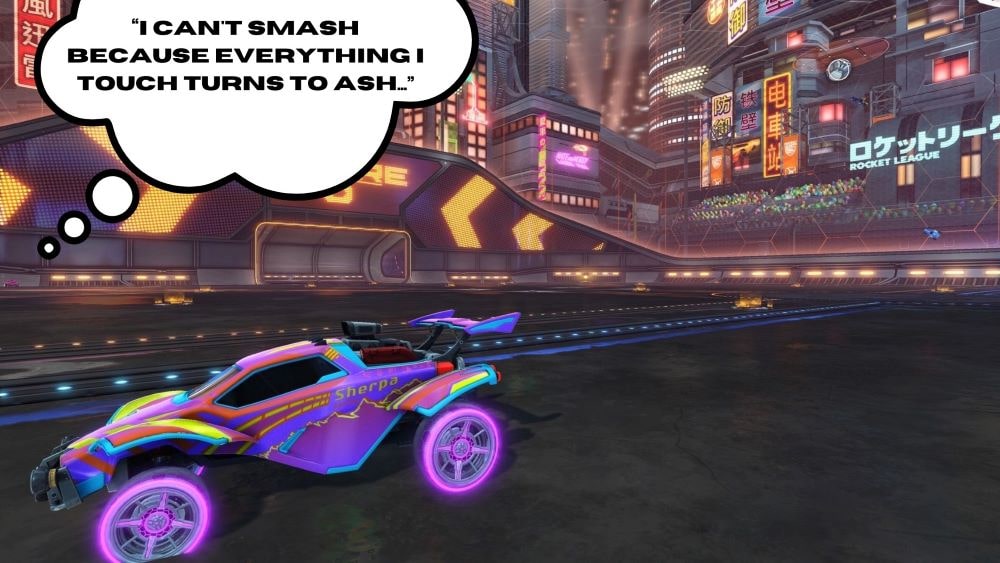 There’s nothing more frustrating than a teammate who’s afraid of the ball.

If a teammate is too passive, he’ll miss nearly every opportunity to launch a counter-attack. He’ll also place himself in challenging positions to save the ball. He sits motionless in net, guarding the front post, and constantly doubts that someone has rotated in behind him, breaking your team’s flow.

A teammate who’s playing scared is likely in a mental slump or a new rank. He’s uncomfortable. Don’t dig him any deeper into that hole by exhibiting toxic behavior. Be kind and respectful. When the inevitable rain of “Sorry!” massacres the quick chat, be polite:

Because it doesn’t have to be a problem, don’t make him feel like he’s breaking rotation. He’s already overthinking whether he’s cutting rotation plenty without any assistance.

You don’t want to let your shivering teammate override your thought patterns. Focus on the things that matter. Motivate yourself to unleash your best self in that game. Pass more. It helps your teammate feel trusted.

Prepare yourself for the worst. Rotate back faster and more frequently. You’ll survive more enemy shots, and it’ll force your teammate out of his shell. It’s better to lose a goal opportunity than to surrender a goal. 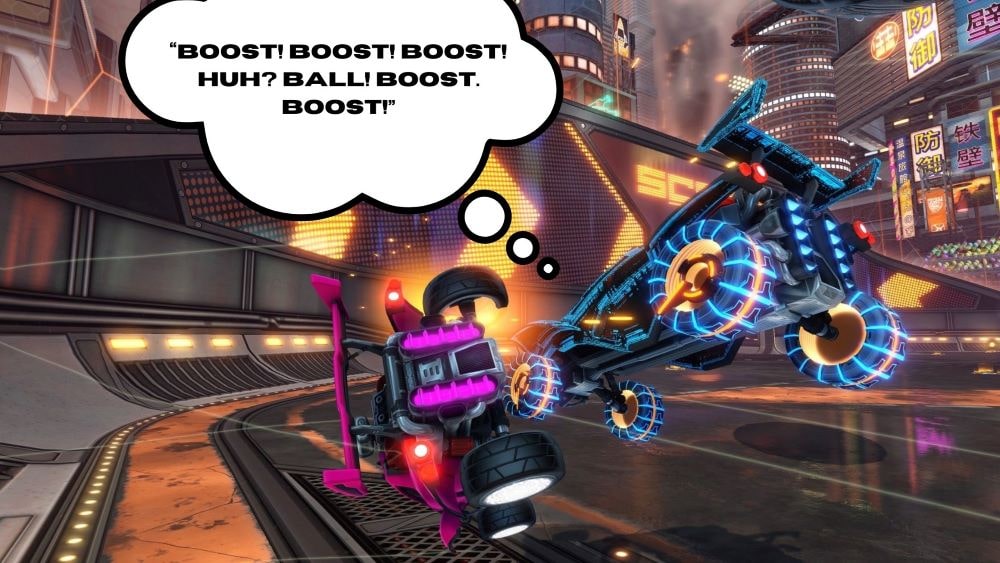 Ah, yes. The reject humanity meme in her purest form. You may feel tempted to rage out and call your teammate a monkey. Obviously, that won’t win you very many games.

If your teammate is a boost bandit, pick up those poverty pads.

Rocket League is a game that rewards adaptability and quick decision-making. If your teammate feels most comfortable swapping solo plays and retreating for boost pads early, your best bet is to wait for an opening before taking a shot. Use bait. Lure opponents out into making weak 50/50 challenges. Don’t pass to Casper the friendly ghost – that’ll get you scored on.

The Teammate With With Weak Mechanical Skill

Sometimes you’ll get teammates who struggle to make meaningful touches. They continue to rotate relatively well and have pretty solid positioning, but they’ll smack the ball into the corner on an open net. Their passes are too weak to vault the ball over defenders. They’ll shoot the ball at 10 MPH.

You get the idea.

If you’re in a rank where this is a common issue, you likely do it too. If you’re finally starting to notice bad touches, it’s a sign that you’re getting ready to rank up soon!

He’ll make bad touches, and he’ll miss the ball, but you still need his support. Rocket League isn’t a game about air dribbles. Rocket League is about teamwork. Spend your energy acknowledging the things your teammate does right. Keep that positive mentality, and the goddess of rank will reward you. 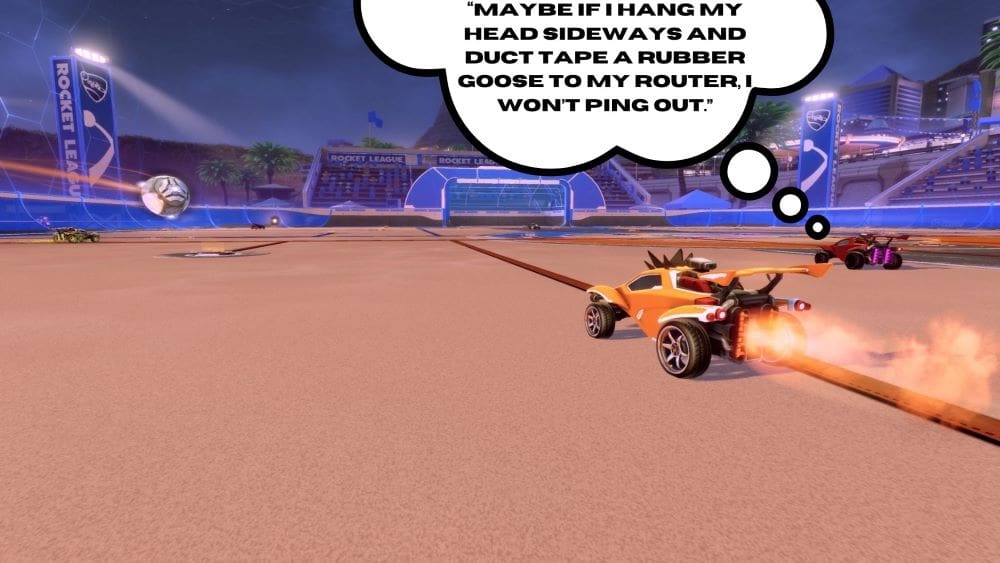 When a teammate whiffs, take a glance at their ping.

Look, life isn’t fair. People who live in the marshlands of some rural banjo-plucking village are allowed to enjoy Rocket League, too. Have some sympathy. It’s difficult to read a chaotic ball that teleports across the field.

This is the only time I’ll tell you it’s okay to chase. Glue that ball to your nose and unleash your inner-freestyler. Go nuts.

But the moment your teammate makes a meaningful touch, ease off the ball. Give him a chance. Sure, you might be good enough to win on your own. It’s not going to be as easy as working with a team. A team that whiffs still covers more ground than you alone.

You can’t expect a silver to execute something that works in a diamond lobby. When a champ fakes a challenge against a gold, the gold won’t take the bait because he has no clue what he’s supposed to be falling for.

Let me use an example: Backboard clears and wall plays become more lethal as you rank up. But if your teammate jumps for a save when you were hugging the backboard, he’s probably accustomed to teammates that whiffed similar save attempts.

He might not even be aware of the concept at all.

Another common cause for a double commit is when a teammate doesn’t expect you to have any recovery skills. Half flips and flip cancels, jumping for a second touch on the ball, crossing the midline, and fakes are the most common situations where a teammate may not be prepared for you to stay on the ball.

If he’s there, let him take possession. You won’t like watching the replay as you and your teammate race one another toward the ball. You’ll both look equally bad.

Keep your composure. Your teammate is trying to rotate. I’m certain of it. You’ll need to rotate in ways familiar to him. Gain his trust with each touch you make. By the end of the match, he’ll be staying wide for passes and steering clear of your saves.

Some teammates aren’t necessarily bad enough to warrant a new playstyle, but deserve an honorable mention for making our blood boil.

That covers every category of bad teammate habits in Rocket League, and how to adapt appropriately. Sometimes you’ll be forced to play in a style that’s uncomfortable to you, but you’ll grow from the experience.

Players don’t become pros by constantly playing in a style that’s most comfortable to them. Players become pros by exercising flexibility and overcoming obstacles that feel daunting. They become pros by becoming great all-arounders.

Many players believe that a Plat 3 has about 80% of the mechanical mastery required to hold up in lobbies as high as Champ 1. Honestly, I agree. For me, the grind from P3 to C1 was a constant battle of attrition that took place entirely in my own head.

Toxic teammates are arguably the biggest hurdle to overcome in the Rocket League grind. You’ll need to fly high and take a few breaks. But I can promise you these aren’t hollow words of encouragement: You can and will rise above it.

Just be patient with yourself and those around you.