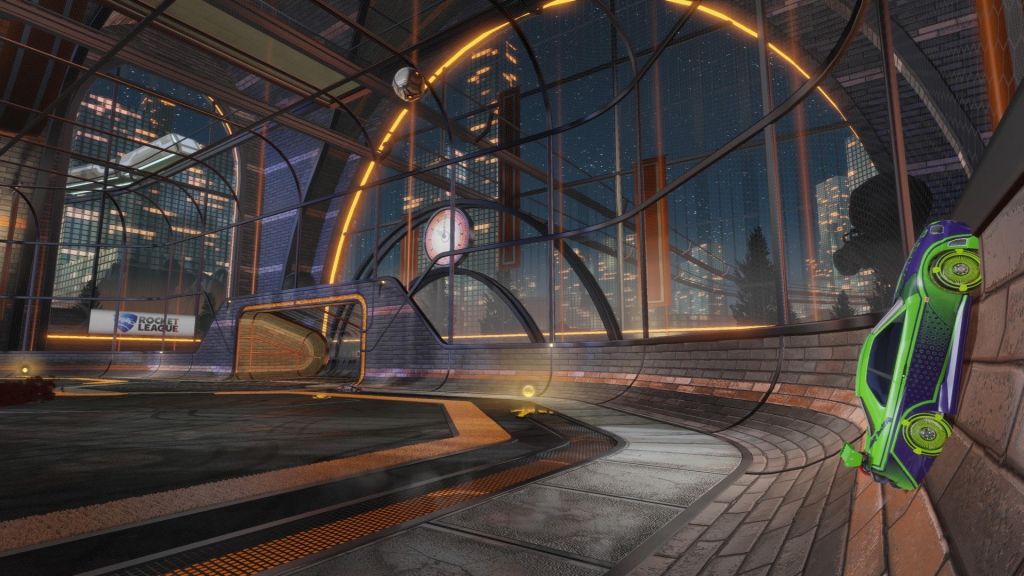 Reading The Glyphs on The Wall:
7 Rocket League Reads That Will Help Improve Your Rank Dramatically

If I had to boil down what makes Rocket League such a robust gaming experience in just one sentence, I’d say it’s the ability to drive all over the stadium walls.

Rocket League maps are, without a doubt, designed to keep pacing brisk and exciting. It’s an aspect of the game we can easily take for granted.

But we don’t want to take our ability to drive on walls for granted. The wall is our best offensive asset in RL, and it’s time someone told you why:

Bronze 1 - Plat 1: Knowing When The Ball is About to Roll Off of The Wall

In lower ranks, players hit the ball at slower speeds and tend to take longer to reach the ball. This can make attempting to hit the ball off of the wall daunting.

Slower hits mean the ball will lose momentum on the wall sooner – and begin to roll off.

Once we couple that with slower reads: you’re likely to get to the ball after more time has passed, increasing your chances of driving to a ball that’s getting ready to roll off of the wall.

There’s a solution so simple that even your ape-brained teammate can do it. Side flip off of the wall.

Side flips will be your most consistent and effective touch for centering the ball in the enemy half. Fewer whiffs and more effective midfield passes? Sign me up!

More often than not, I see players in these ranks attempting front flips off of the wall, and missing the ball entirely. Front flips are often the first mechanic we ingrain into our muscle memory, but you can’t use them for everything. Actually, Fireburner told me I shouldn’t front flip for anything. Just some food for thought.

Front flips whiff because you’ll conduct your flip at your initial jump height. If your car does connect, you’ll still get considerably weaker touches – or even worse, hits that only fly forward.

That’s a big no-no. Pushing a ball without intent buys your opponent’s time to prepare a defense.

So, the first step to improving your wall reads is to vote “Yes” on proposition side flip.

Side flipping from the wall will help you build your confidence, which is rule #1 to being an efficient wall-crawler. It’s also easy enough for anyone to incorporate into their game.

Yes, reading how your car will land still counts. It might be the most important skill on this list.

In the fast-paced game of Rocket League, recoveries are king. If you get knocked out of the play, you need to buckle back up, tie your shoes, and get back in the game as quickly as possible.

If you’re still flipping into walls or crash landing belly up on the wall after an aerial, it’s time to correct that. Here are some wall recoveries that will speed up your gameplay dramatically:

Recovery Rule #1: Typically, you want to land on the wall with your wheels, and point your vehicle downward. This may seem like a small change to your game. It can save you 3-5 seconds. That amount of time can get you pretty far across the field if you aren’t flailing around like a tuna fish in a puddle.

The exception to this rule is when you have possession of the ball. You’ll often want to land on the wall horizontally, facing the direction that the ball is currently moving. I’ll have a visual example of this recovery near the end of my ‘Backboard Clear’ slideshow.

Recovery Rule #2: Wavedash off of walls to cover more ground. I’m no mathematician, but I do know my Pythagorean Theorem. The hypotenuse of a triangle covers more ground in a shorter distance than the other two lousy lines.

P.S. Don’t tell my friends I just used geometry to teach you Rocket League. They’ll never let me hear the end of it.

But it’s pretty simple. If you need to get off the wall fast, This will save you 2-3 seconds. Instead of turning your car back down the wall, covering that whole distance, THEN turning the direction you need to go…

Just jump off the wall, adjust your car to land on its back two wheels, and lunge your car forward with a flip. You’re already back in the play.

If you’ve never heard of a wave dash, it’s a flip that immediately gets interrupted by the ground. You still get the speed boost from the flip, but you land much faster.

Bonus Wall Recovery: While not as practical as the other two recoveries, you can jump nose-first into a wall while boosting and [half-flip] directly behind you to make full use of the recoil after smashing into a wall.

It’s a lot like how swimmers bounce off of walls to change directions at high speeds. I can’t say I recommend doing this often… but if you can read the ball taking a quick 180 in trajectory, this can help speed up your game. You can angle your approach up to about 20 degrees before losing some of your recoil, just bear in mind you’ll bounce off at the opposite angle. It’s no different than tossing a rubbery object to the ground. You’ll get a perfectly mirrored trajectory.

So, the second wall read that will improve your game: put a little extra thought into your recoveries.

Silver 2 - Plat 3: When The Enemy Clears The Ball by Rolling It Across Field - Contest Him on The Wall!

In lower ranks, players tend to focus on the current location of the ball, rather than where it’s traveling to. That’s because reading the ball’s trajectory can be hard.

But if the enemy is rolling the ball and headed to the wall, it’s pretty easy to know where he’s going with it. It also doesn’t take a rocket scientist to know that the ball will continue to roll once it hits the wall. That makes wall plays arguably the easiest to read in the game.

Challenging the enemy immediately isn’t always your best play. When he’s clearing up the wall from his front post, it’s almost certain to be the wrong choice.

We know hitting a ball that’s rolling from a different direction is a guaranteed popup. If we tilt that axis 90 degrees and imagine making that touch from the wall, that pop becomes a potential shot on net.

Opponents are likely to have looser possession after taking the ball up the wall, too. They typically turn away from the ball in their corner to pick up that fatty, delicious 100 boost pad. Just the thought of it makes him salivate.

Translation: You have a better chance of making an uncontested hit.

As you improve, you’ll be able to use similar reads on high bounce clears across the enemy net, especially when you’re too far out of the play to attempt a dunk. Here’s an example:

Plat 1 - Diamond 3: Aerials You Launch From Off of The Wall Are More Aggressive Than Those Started From the Ground

In low-ranked lobbies, I always see people jumping for aerials with one thing in mind.

But those hits seldom have much intent.

Now, I know it takes a lot of practice to fine-tune aerial touches, but there is one thing you can work on today. You can practice launching your aerials from the wall.

When you jump from the wall, you’re already angling yourself to make a shot toward the enemy goal as you approach the ball. You will naturally hit a great angle without much micro-adjustment. You’ll also have a lot more speed behind your touch than you would if you made a last-second adjustment.

Imagine jumping for a ball that’s hovering over a mid-boost pickup. If you attack it from straight behind, you’re only going to push it to the corner of the map.

If you hit that same ball from the wall, you’ll get an in-field cut. That brings us to our next wall read.

By the time you’re in plat 2, you’ll start coming across players who defend on their backboard. This makes those “roll the ball along their backboard” plays ineffective.

Players in this rank also start to pay more attention to how they conduct their 50/50 challenges.

If you have full possession of a rolling ball, consider taking it up the wall and hitting it back to center field for a teammate. It will create a tougher shot to save than rolling it straight toward their defense.

Good backboard defense is often the primary skill that separates good players from mediocre players. I’m not just talking about hitting the simple wall-roll passes I mentioned in the last section, either.

Let me echo the Zen philosophy of true enlightenment: If you think you’ve got your backboard reads down, Sensei says you still need work.

Here are the top 4 reasons to tighten up your backboard defense:

By Plat 2, you should have a reasonable idea of when it’s important to read a shadow defense play. You’ll need to know proper shadow defense etiquette before being able to clear on the backboard effectively.

Plat 3 - Supersonic Legend: Learning to Challenge From The Wall

Challenging from the wall annihilates your opponents’ ceiling shot setups, but it adds a boatload of practical value, too.

The trick is to memorize how far the ball pops off of a car when hitting the ball, and preparing yourself for a dunk.

And since the trick is to read better, the best tip is repetition. You just need to put in the work. Still, there are a few things you can do to make this easier.

Early on, the main thing you can do is give yourself more space. Rather than trying to meet an opponent on the wall and 50/50 at his exact location, consider staying a few feet back to watch for a moment, he may have more fragile possession. To cut the ball in-field, players often need to position themselves in a vulnerable state, exposing a weak side on their 50/50.

Of course, this requires the ability to read when you’re beaten to the ball in the first place. If you’re in ranks that are fluent in reads like this, you probably have to worry about fakes, too.

You’ll also want to avoid using your flip. Challenges from the wall should be precise. Wall challenges are a critical moment for everyone on the field. Both teams have a player stuck on the wall after the challenge is complete, meaning the team that loses the 50/50 has a weakened defensive structure.